Farmers are eternal optimists or crazy; maybe both.  What else would explain the willingness to keep going despite all that Mother Nature throws at them?  I am exhausted from shoveling snow, my knees are giving out and my hands are going numb, and I still haven’t finished shoveling all the usual spots from a big storm last Thursday.  And yet, once I start shoveling, I enjoy being out in the elements and working hard.   There’s a lot to be said for visible accomplishments as they buoy the soul even if they are physically challenging.  You can immediately tell you’ve done something, even if it only lasts until the next snowstorm! 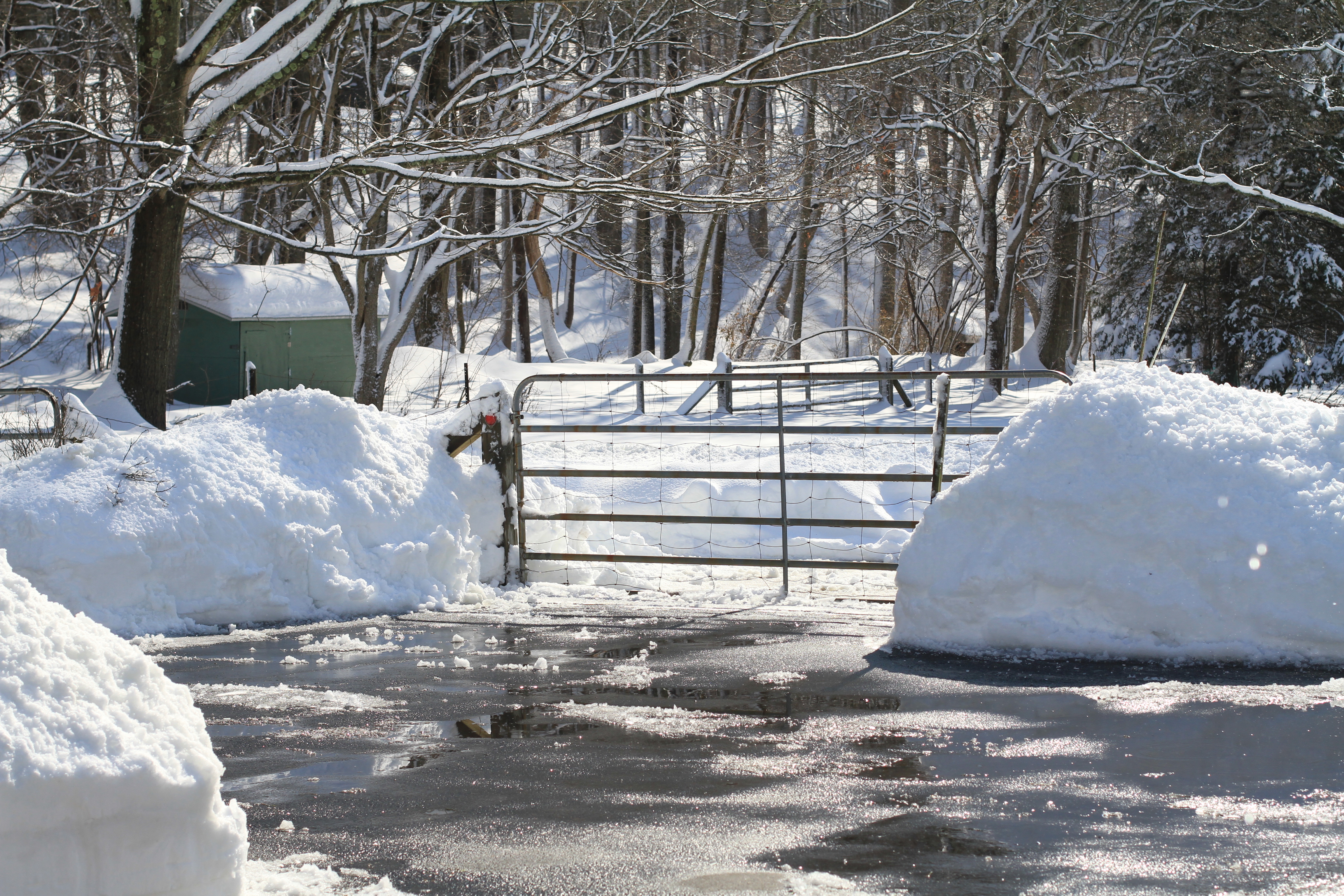 Over two feet of snow last week, on top of over a foot from the week before with no warm-up is giving the farm a canyon look.  This is atypical winter weather here, luckily.  As a small farmer I can’t justify purchasing the large equipment that would make the job less physically demanding that a large farm could.   If all I had to do was shovel the driveway my life would be much easier!  If this much snow were typical I’d also need to build a bigger barn to keep all the animals in one big area vs shoveling paths to run-in shelters and hay feeders out in the pastures.  The chicken house also has flat roofs in the winter confinement area that was built to keep hawks out, and they need to be cleared after each significant snow storm.  The run-in sheds are all flat roofs too.  It’s also pretty much impossible to haul bedding and manure anywhere for composting at this point, so deep layer bedding (covering yesterday’s manure with fresh hay) is the way to go, but makes for a big cleanup project come spring!   Also had to dig out the drainage ditch just outside the chicken compound so that melting snow doesn’t flood their main gathering area (it IS going to melt, right?).  In other words, setup and equipment determine how much work is involved with maintaining the farm, and the small farmer has to put a lot more physical labor into the enterprise than a larger outfit.

[The photo immediately below is from 2 weeks ago, after a 10 inch snowstorm.  Path is from west of the house looking to the wethers pasture with a run-in shelter and hay feeder visible.  If you look carefully you can also see James (white goat in shelter) and Rembaldi (black goat).  As of today you can no longer see into the shelter due to the snow pile in front of the cattle panel enclosure that surrounds the run-in shed]. 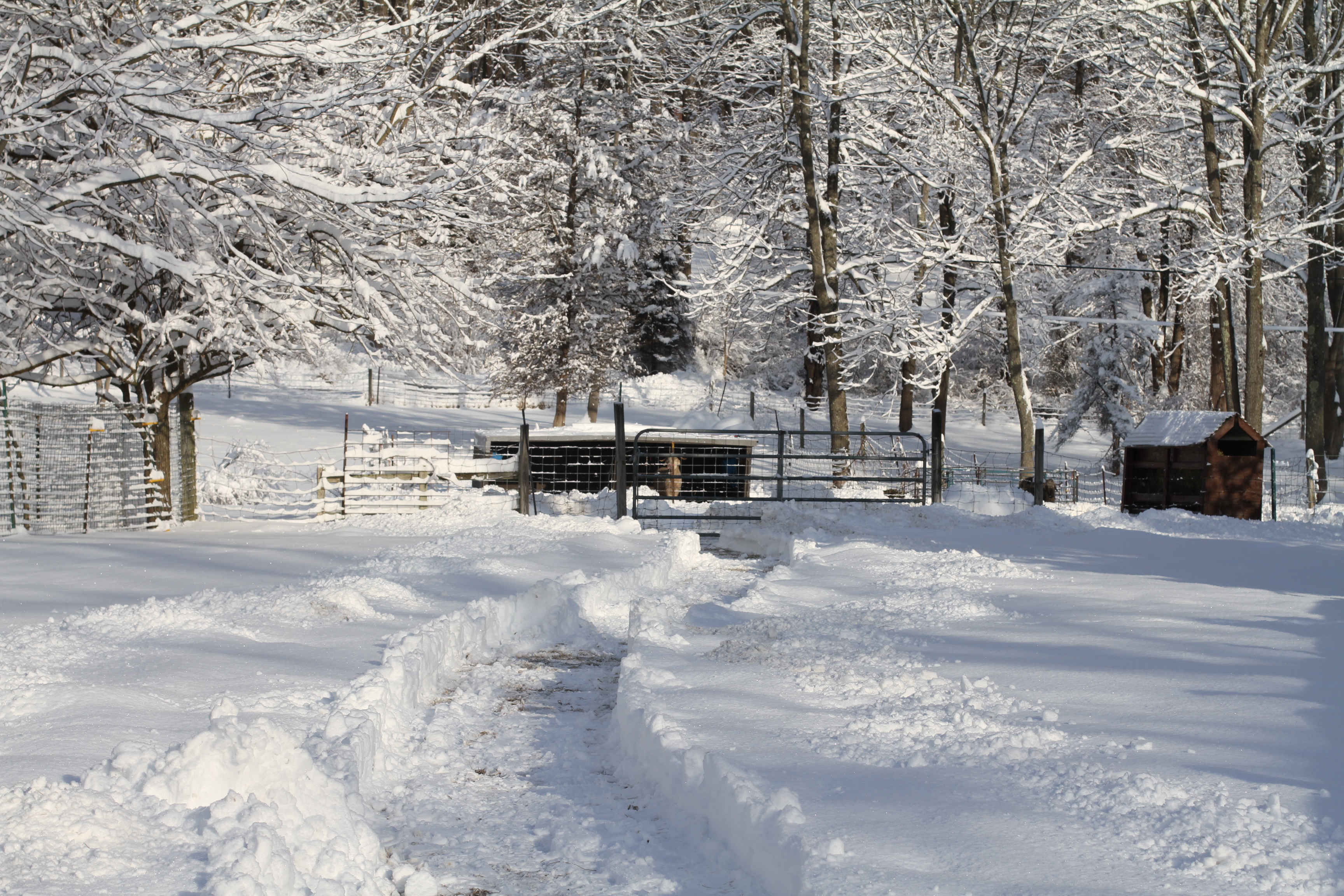 The animals all seem to take the weather extremes in stride but it can be deceiving just how close to the line between  life and death they are walking.  Walking out to one of my small sheds (to clear the roof of the >2 foot of snow so it doesn’t collapse) was exhausting.  Sometimes I could walk on top of the snow for a step or two, then I’d fall through, sometimes all the way to the ground, sometimes only down to the last ice layer; often falling over at the unstable footing.  Needless to say I felt like I’d run a marathon by the time I’d make it to the shed!  The small birds have it made as they can land on the snow without sinking through. 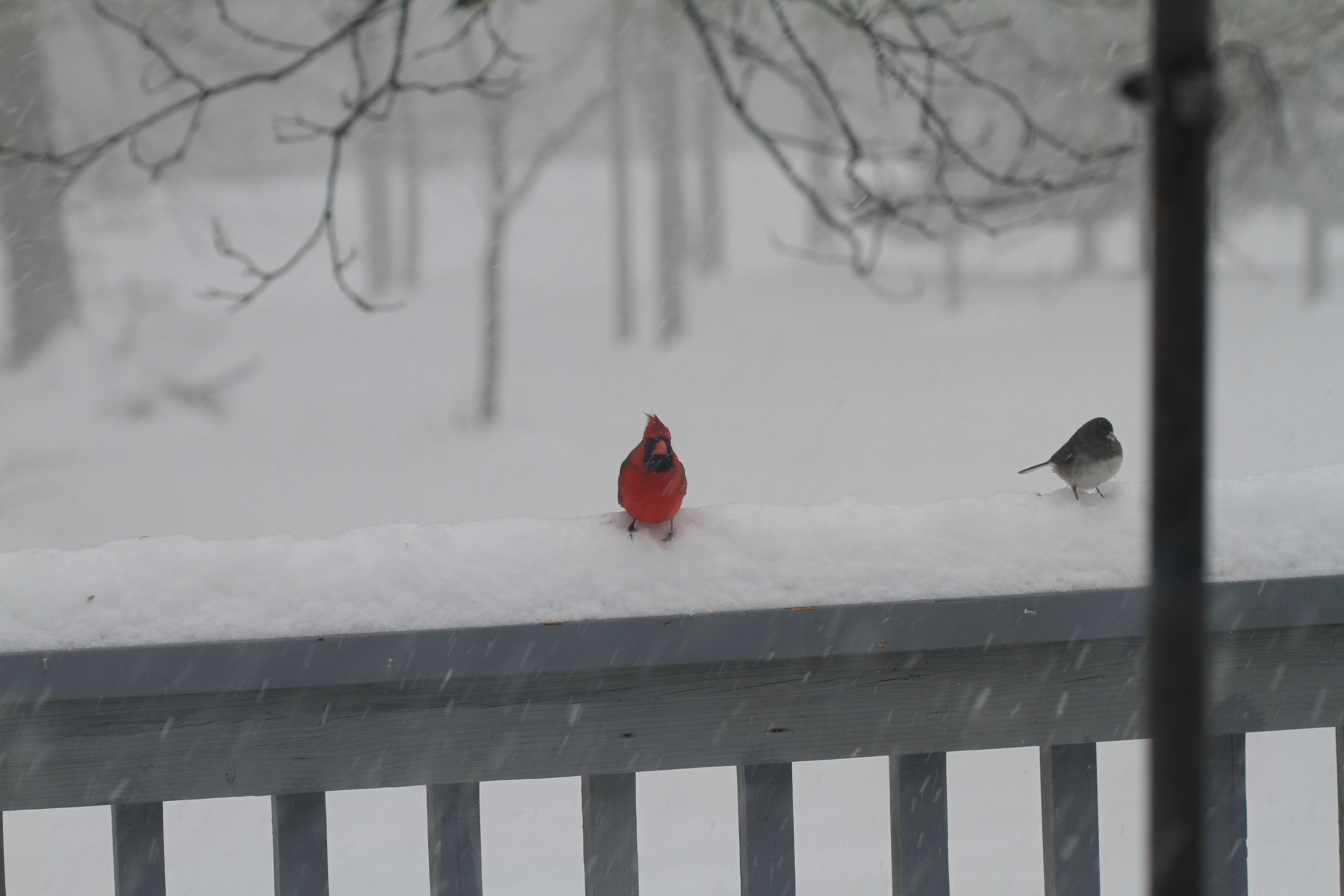 When I go out to feed the goats at night and lock them into their coyote proof enclosures they are frantic for their food and the alfalfa cubes I give them as treats.  It’s hard to see as it tells me they are hurting.  I bring them warm water too and they will drink most of the bucket before I’ve had a chance to lock up and make my way out of the pasture.  Another dilemma due to all the snow is that the fences can be walked over by predators.  All I can do is hope that the coyotes are not ranging as broadly as normal.  Based on the lack of tracks, so far so good.  I’m sure all the snow isn’t making their lives easy either.

You know it’s cold when your breath freezes instantly into icicles! 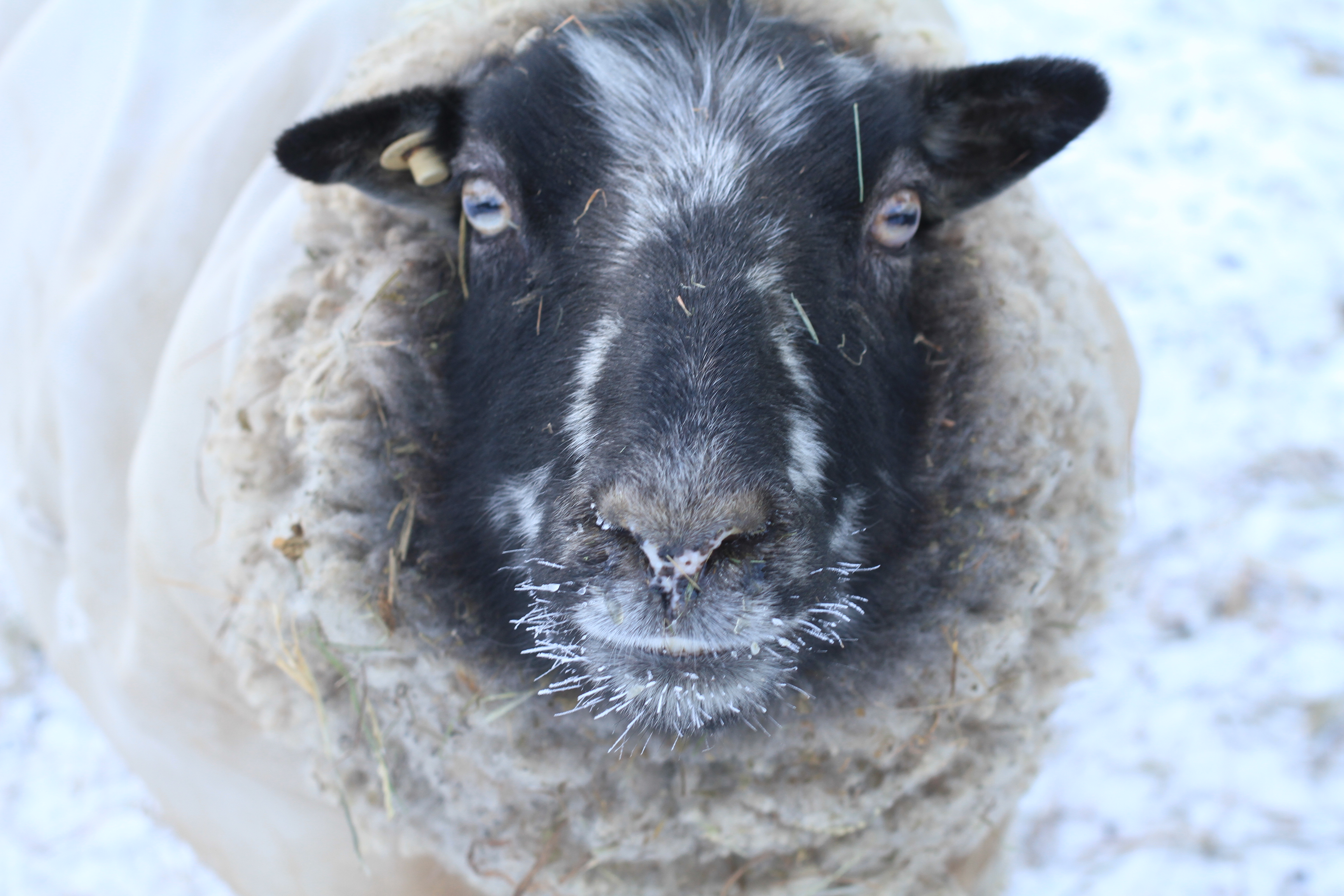 The animals handle the cold really well – much better than me!  During bad spells of weather I am happy that humans discovered how to make fire and then invented central heating.  You have to be impressed by the humbleness of animals and their ability to take what comes their way.

Goats and sheep are very similar but their personalities are very different.  Goats are much more interactive than sheep.  My goats walk in front of me in a blocking move to stop me from leaving.  My sheep will follow me for a treat but would never try to trip me.  One of my sheep, Bella,  is more aggressive than the others and at nearly 300 pounds can be a handful.  She will push me with her nose for treats if she smells them and follows within inches behind me with her head down, looking like a missile.  An amusing sight!  Mostly the sheep watch my activities with attentive paranoia but will come forward to take a treat if one is offered.

Goats really appreciate personal attention if they are feeling bad and will nuzzle you with their thanks.   Sheep are generally so much more nervous about being handled that it doesn’t noticeably help them.  They do love to be scratched, between the front legs and on the checks are favorites of my sheep, but they have to be in a happy, relaxed mood to allow such behavior.  Generally if they are sick, they are fearful as they know they are more susceptible to predators.

Prey species don’t show they are hurting until it is very bad indeed so farmers have to keep a sharp eye on their charges.  Even very minor behavior changes can indicate that an animal is in trouble.  I can sometimes tell almost as a feeling, not because they are doing anything specific to indicate they are hurting.  They all have their own personalities and knowing each of them well is the key to keeping them in good health.  Large farms can’t possibly do this.  I had over 50 goats and I reduced my flock size after realizing that I could not give them the care they deserved.  Since animals “handle” what they are given I feel a greater responsibility to ensure they have healthy, happy lives.

As an animal lover I struggle constantly with the continuum of offering an animal an existence vs providing them a ‘quality’ life.  I believe that it is better to put an animal down humanely than to keep them alive under bad conditions but where to draw the line?  There is no single correct answer, but for myself I have become more conservative over time, feeling that the animals in my care deserve a good life and if I’m stretched too thin it is best that I don’t take on additional animals.   Currently I have 10 goats and 3 sheep and this feels like a good number.   All the same, it is always hard to pass on sheep or goats needing homes as their options are slim vs companion animals such as dogs.