2020 was a crazy year by any standards.  A farm is a great place to be during a pandemic as there’s always lots to do, the scenery is great, and isolation is built in.  Because of a more inward focus perhaps, there were far more wildlife encounters/ sightings than usual.  Here are snapshots in time that capture the essence of 2020.

Highlights included: I lost James (15 year old Angora goat) to heart issues and gained a lot of Canada Goose friends (learned a lot about them – subject of another blog entry wip!).  Re-did the pasture fences to fence out the areas now too wet for ruminants (meningeal worm) and began returning the soggy areas to wetland habitat for wildlife.  Lots of fox, skunk family, and baby racoon interactions this year.  Ghost (hen) got nabbed by a grey fox while out in the grass but I ran to the rescue and she put up a good fight.  Once I found a specialty bandage she couldn’t pull off she healed up quickly and is no worse for wear!

I’ll be helping out and selling dyed and natural roving, tops and yarn at the up-coming up event.  Love to see you there! 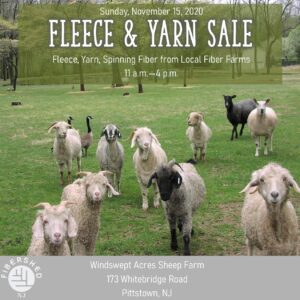 For everyone’s safety masks are required. A limited number of timed-entry tickets will be used. With purchase of a ticket, you will receive a raffle ticket for our hourly drawing for a NJ Fibershed Tote Bag containing a NJ Fibershed magnet!  Must be present during hour on your ticket to win.  Tickets are available up to the day of the event or until sold out.  Get your tickets now!

Children under 15 years of age may enter for free.

This is an outdoors event, with field shopping and pasture parking, which may have uneven footing and/or be muddy.

Hand washing stations will be available, but no public restroom facilities on site. 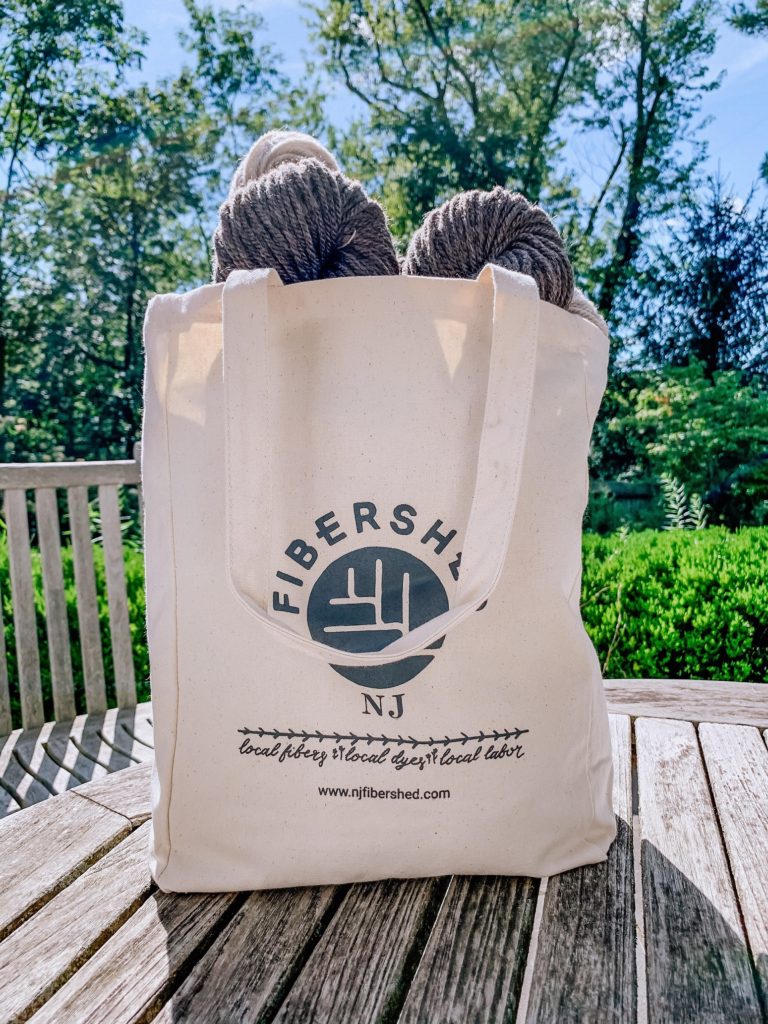 I recently bought an antique Amish swift from my artist and fellow fiber friend Linda Czech. Sadly she is backing out of fiber pursuits because her cats are fixated on destroying anything fiber she creates.

I took it “for a spin” to skein a bobbin of 2 ply Jacob wool handspun I’d done for the Woolverton Inn. The swift works perfectly to wind directly from my spinning wheel without my having to lean over or stretch up and it also counts the yardage as it goes. Not to mention that it just looks really great sitting in the living room!

The Farm has always supported butterflies by keeping butterfly preferred flowers in the gardens and in particular looking out for Monarchs by raising them from caterpillars when their numbers are low. 2019 was the best Summer for Monarchs in quite a few years so I decided to start listing results for on-going comparison of years. But first a few pics….

Which far surpasses the 0% observed surviving in the garden.

2 fell – one was crushed while cleaning the cage as it wasn’t seen on the bottom after it had fallen. The other fell just after the chrysalis formed and it was still too wet to survive the fall. This was the last caterpillar raised (9/18/19) and it seemed to have a bad destiny from the start. It wanted to j on the test tube rack for holding the milkweed leaves, when relocated to the top then picked the zipper of the cage, etc.

A pair of bluebirds have nested in one of the front gate posts and had 3 nestlings they were feeding. Unfortunately a blue jay caught on and had been stalking the nest. The pair had been attacking the blue jay, taking it all the way to the ground until it would give up and take off.

Unfortunately on Father’s Day, the bluebird father was killed defending the nest. The blue jay was found eating the father in front of the nest. I don’t know that the blue jay directly killed the bluebird, it may have been an accident, but the outcome was the same. The mother now has sole responsibility for the the remaining two nestlings. Based on when I saw her incubating them (may not have been the 1st day) they could be ready to fledge as early as the June 23rd or it could be closer to July 1st.

After the body was removed, I made a predator guard for the nest using hardware cloth. [Plans for a Noel Guard can be found at various sites including Cornell’s NestWatch sites: https://nestwatch.org/learn/all-about-birdhouses/features-of-a-good-birdhouse/ or the VA Bluebird Society site: http://www.virginiabluebirds.org/about-bluebirds/nest-boxes-guards-signs/ ]

After watching for an hour, the mother still couldn’t figure out how to get into the house so I removed the guard. All I can do is keep the bird feeders behind the house well stocked and watch for any further attacks. There are lots of youngsters coming to the feeders with their parents right now including blue jays.

As of June 20th the mother is feeding them regularly and the nestlings look like they are doing well. Another pair of bluebirds has shown up in her area and I’m watching closely for any issues between them that would effect the nestlings.

This is the saga of OG observed beginning in the Summer of 2018.  I have added to the story for as long as I could recognize OG.  Never in >20 years of living with Canada Geese had I seen what happened to this goose.  In 2020, I became involved in a more involved goose adventure that helped me understand what happened to OG as well as learning a lot about goose vocal and body language and to be able to recognize a limited number of geese.  For these adventures read my post Life With Canada Geese.

There have been Canada Geese nesting at the pond since I moved here in 1997 but none nested here in 2017. There have been so many geese over the years that someone from US Fish and Wildlife showed up telling me they had identified the Farm as a hot spot for goose activity in Hunterdon County via satellite and wanted to take a look! More than a little scary….

Anyway, 2018 was a whole new set of geese, none of the older families reappeared. This was easily recognized as the prior families were quite familiar if not super friendly with the occupants of the Farm.

This new group of geese did not win any parenting awards as they blindly followed the goslings onto the roads and did not seem to point out other hazards either. The prior families were much more savvy and proactive about hazards to the goslings. Needless to say it was a miracle that any of them made it to adulthood. Very late in the season, a gosling showed up that had born much later than all the others. He seemed to lose his parents regularly as the goslings would all mix together and it became difficult for the parents to realize when one was missing (later learned this is called creching aka community baby sitting).

In late August OG was found crying at one of the pasture gates when he couldn’t figure out how to get through it, but the only goose who came for him was another gosling who was a bit older. The two of them stayed together for another couple of months (last seen together Aug. 31, 2018).

When it became time for the geese to start making day trips, they all took off and left OG. I’ve never seen adult geese abandon a gosling before this. Eventually even his buddy took off (OG alone Sep. 1, 2018), leaving OG crying relentlessly for a good 30 minutes afterwards. OG disappeared for a few weeks and reappeared alone on Sep. 16th. He stayed at the pond alone until some flocks of geese began day visits on Sep. 23rd. The geese would return most days and OG would cry and cry when they left in the evening. Listening to him cry was truly heart breaking.

This went on for a week and I began to think he had something wrong with him, that he couldn’t fly and maybe that’s why the other geese gave up on him and left. Then suddenly OG started trying to fly when the other geese were leaving. On the third day he was able to fly off with them (Sep. 30th)! I thought I might recognize him when he returned because we was so much smaller than all the others but I couldn’t.

I kept watching the geese cycling through and counting the family members to see if there was a pattern. Nothing obvious emerged, but on Oct. 29th a single goose landed near sunset and called repeatedly for over 15 minutes before taking off. I felt pretty sure it was OG as I’ve never seen a lone goose except for him. Different numbers of geese flew in most days and departed at dusk through Nov. Then on Nov. 27th a lone goose got left behind by a group of 20 that left at 10:30AM. He cried a good long time but then stayed until about 3PM before departing to the north east.

Dec. 23rd there was a lone goose sighted with a group of 7 that left to the north. Not sure if this was OG but it might have been. Dec. 27 a lone goose arrived at 7AM and was joined by a few other flocks during the day. He left with a group of 6 at 5PM heading towards Spruce Run Rec. Area. He hung close to this group but they kept driving him away if he got too close so he mostly stayed with a group of 3 mallards also present that day. Since then I’ve seen him (assuming it’s a him as the family groups’ male drive him away if he gets too close) about once a month, always alone.

As the 2019 goslings began to hatch out he was here most of the time, keeping with but not too close to the families. I could never tell if he was hanging closer to one family than the other which I found odd as I had hoped he’d finally find his family at nesting time. Since he was born here and the families return each year to the same place I’d assumed he’d eventually catch up with them.  According to the Cornell Labs bird monograph on Canada Geese, young geese stay with their parents until they pick a mate at 2 years, and even then often stay with one of their families until they are 3 before hatching their own goslings.

Orphan Goose has been renamed Lone Goose…have seen him quite a few times, the last on Dec. 7 2019. Over the summer he was in a big fight with another male and ended up on the outskirts of the goose community even after that group had moved on. He left several weeks later.

Lots of useful info on carpet beetles and clothes moths. Spoiler: prevention does involve vacuuming your closets at least once a year, preferably more often YIKES!

According to a recent new release by the American Physical Society “Knitting is a periodic structure of slip knots.” Elisabetta Matsumoto has been using math to describe properties of textiles/ fabrics such as stretchiness based on knitted stitches. These formulas may ultimately be applied to biological tissue replacements such as cartilage or tendons.

More information: The 2019 APS March Meeting presentation “Twisted topological tangles: or the knot theory of knitting,” by Elisabetta Matsumoto, Shashank Ganesh and Markande Dimitriyev, will take place Wednesday, March 6, at 8:00 a.m. in Room: 259A of the Boston Convention and Exhibition Center. Abstract: meetings.aps.org/Meeting/MAR19/Session/K63.1