Tiny, an under sized 3 year old Australorp hen,  has been under the weather so I brought her in for some TLC.  She is only 2 pounds 9 ounces!  Jasper is enjoying the new play friend and is being respectful, watching her intently but no prodding.  Can’t say the same for her dry food as he keeps sticking his paws into her cage and extracting food from the dish.  She is loving the shredded carrots, apples and small bits of bread in a Greek yogurt base I made for her.  Photo below show signs of a recent yogurt snack on her beak and feathers! 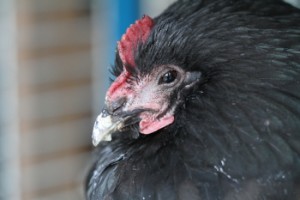 Not sure how things will turn out as she was always under sized and last year spent a few weeks in the house with an impacted crop.   Often with under sized animals their organs can’t support them long term as they haven’t developed properly.  It’s nearly always heart breaking as these are the animals that have the sweetest nature, as if it is their defense plan to get the extra help they need to survive. She is the sweetest thing, allowing me to pick her up and do anything to her without a complaint or attempt to escape.  She takes blow drying her after washing off a poopy rear end in stride as if every chicken receives these beauty treatments on a regular basis.

The other hens were literally walking over (on) her and she wasn’t moving around much.  It has also been quite cold this last week (3 degrees on Sunday), so I felt it was time for an intervention.  She likes to perch on her food dish so I’m swapping out an empty one after I feed her.  She’s also sleeping a lot but when I take her out for some fresh air she runs around for at least 30 minutes before settling down and looking like she needs to come in out of the cold.  She’s unusually thirsty so I’m wondering if it’s kidney failure.  I’ve put her in front of the patio windows so she can watch the wild bird activity at the bird feeder.

Feb. 22 Update:  Tiny stopped eating after feeding herself a good breakfast on Feb. 21, passing away during the evening/early morning Feb. 21-22.  She had picked up a few ounces but was only 2 pounds 12 oz. when she passed.   In these situations I always wonder if there was more that I could have done.  Sadly none of us is all knowing and I did the best I could do for her.  She appeared to enjoy life up to the end without complaint or bad temper and peacefully drifted off to sleep.  A good lesson on aging and passing for all of us.