This chair seat is called “Cleaning Up” and features Sandy taking a bath.  The design is based on my photos of him.  I’m still experimenting with different colors and textures of yarn to find the best for picturing a cat. This time I used white and tan yarn and hooked the stripes explicitly.

I used my homespun and millspun hand dyed yarns, all of which are wool/ mohair blends (details).  The backing is 100% cotton Monk’s Cloth.  I used 13×13 epi cloth.

The wildflower patches are millspun yarns that were hand painted after the yarn was spun.  The background fields were done with yarns that were kettle dyed before spinning.

Good contrast in the colors chosen and work with scissors after hooking to arrange the lines as hooked makes the details much clearer.  Sandy’s face shows clearly on the back of the chair seat but still needs some work on the front side.  Since the colors are so close in value, it is hard to see his face details unless the lighting is bright.

I liked the look here of generic blobs of color versus trying to hook detailed flowers or grasses.

I’ve managed a few fiber projects in recent weeks around all the spring time farm work.  I’ve been making inkles over the winter and this week did two from 100% Dancing Waters Farm yarn (70% mohair and 30% wool).  The draft is the same for both as they were both done with the same threading, but I used white for the weft of one and black for the weft of the other.  The difference is only in the edge, as the last two threads are black.  I prefer the solid black edge, but the white ticking version along the edge is pretty too and the difference in appearance between the two is not huge.  Using a tweed for the center section gives it a gentler look. Will go for greater contrast on my next project for comparison. 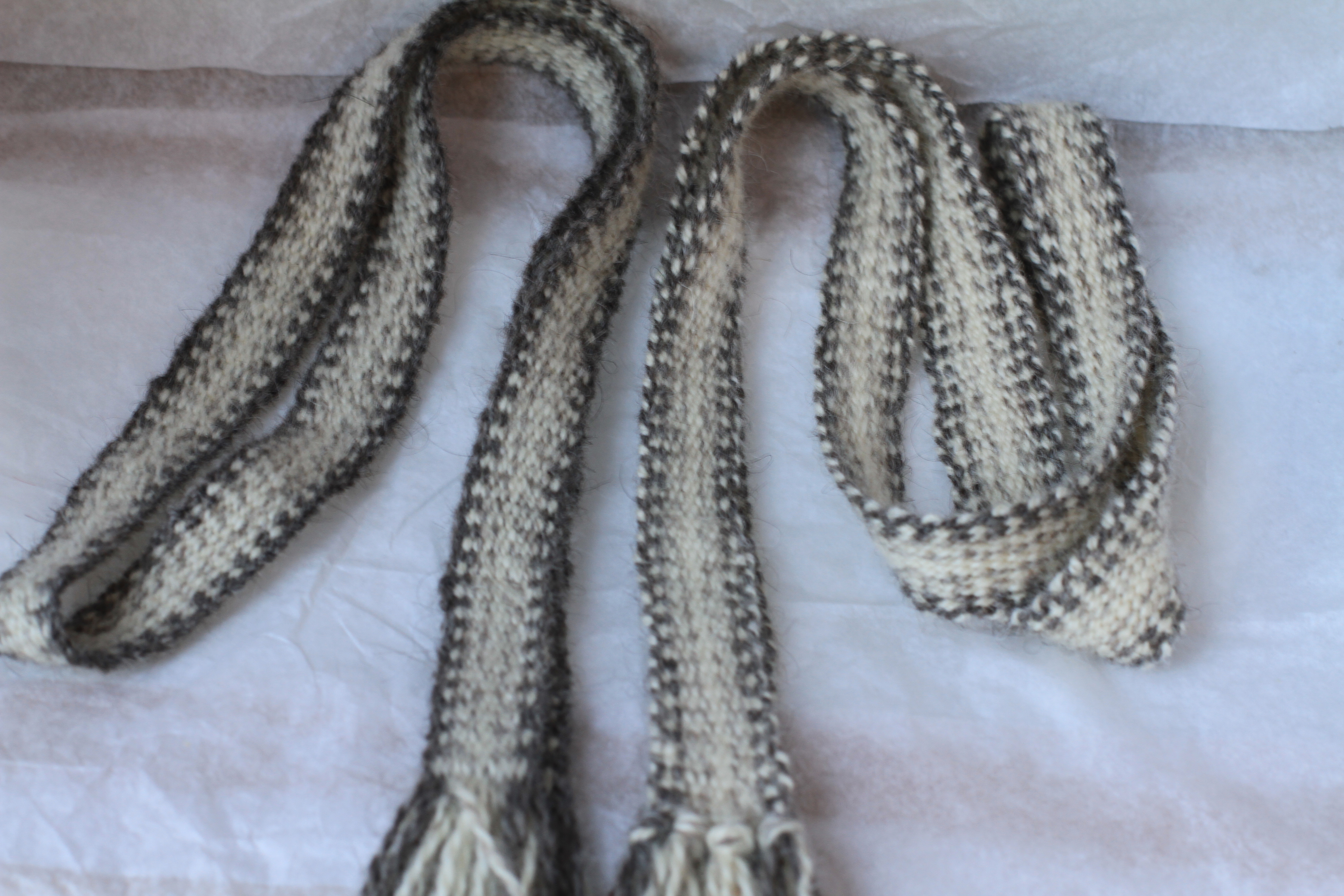 Another project was spinning a variegated fleece purchased at the 2013 Garden State Sheep Breeders Fleece Show and Sale.  It is a black and white fleece, and the color of some of the locks change from white to black along the lock.  According to the sheep’s owner, the color change along the lock reverses from year to year.  I thought this would be perfect for hand spinning from the lock as the beautiful natural variegation would end up a uniform grey if it were carded into roving. 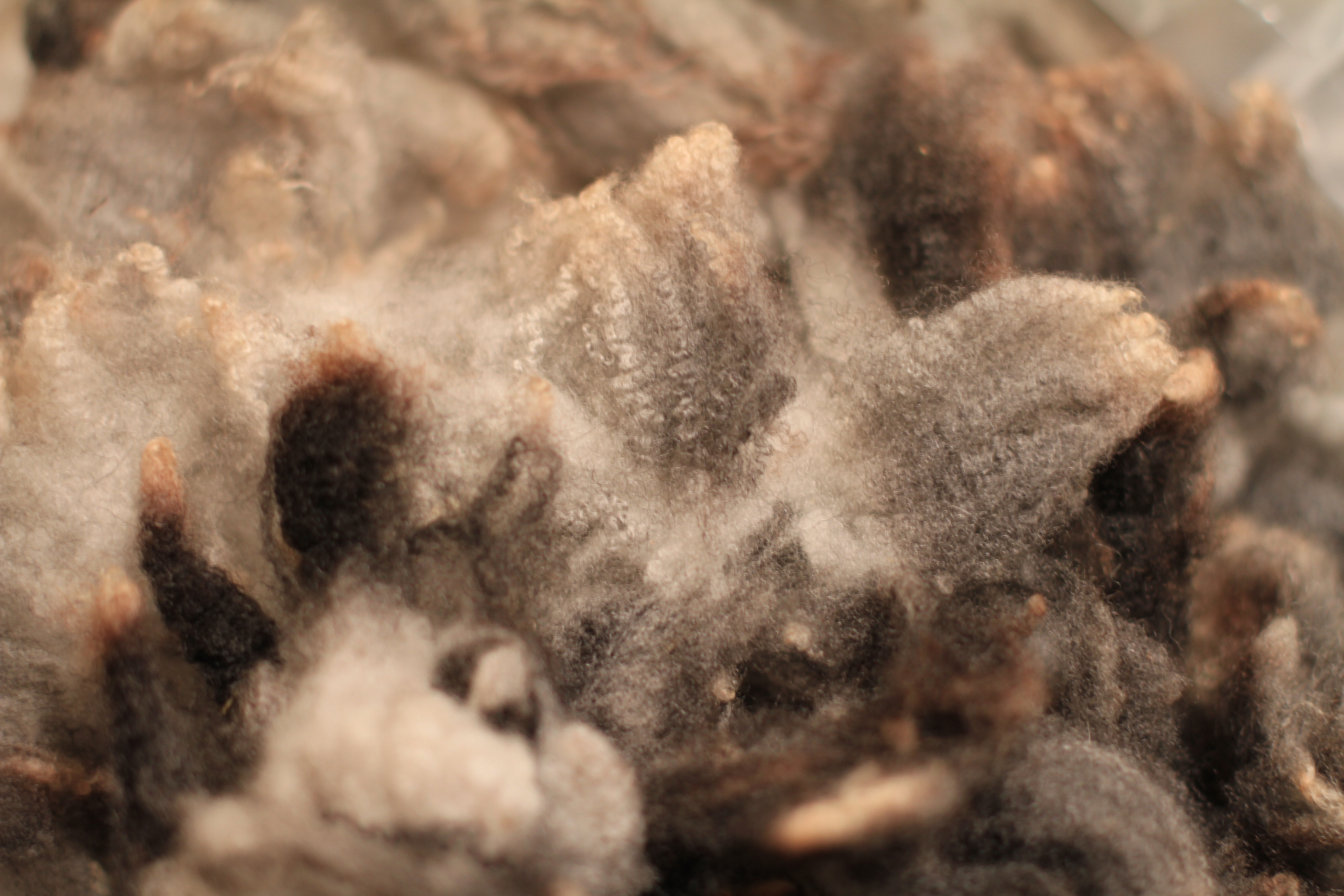 Unfortunately the white sections of the locks where too short (~0.25-0.33 inches) to give me as much color separation as I had hoped.  Also many of the locks had a fair amount of weather damage on the ends (tippy).   This meant pre-drafting before I spun the locks versus spinning right from the locks after washing.  Since there was less color separation than I had hoped, the fiber was not consistently even and there was some VM in the fiber, I went for a thinner single and then plied it versus going with a fat singles or  a Navajo ply (ie- versus preserving the color changes in the single) 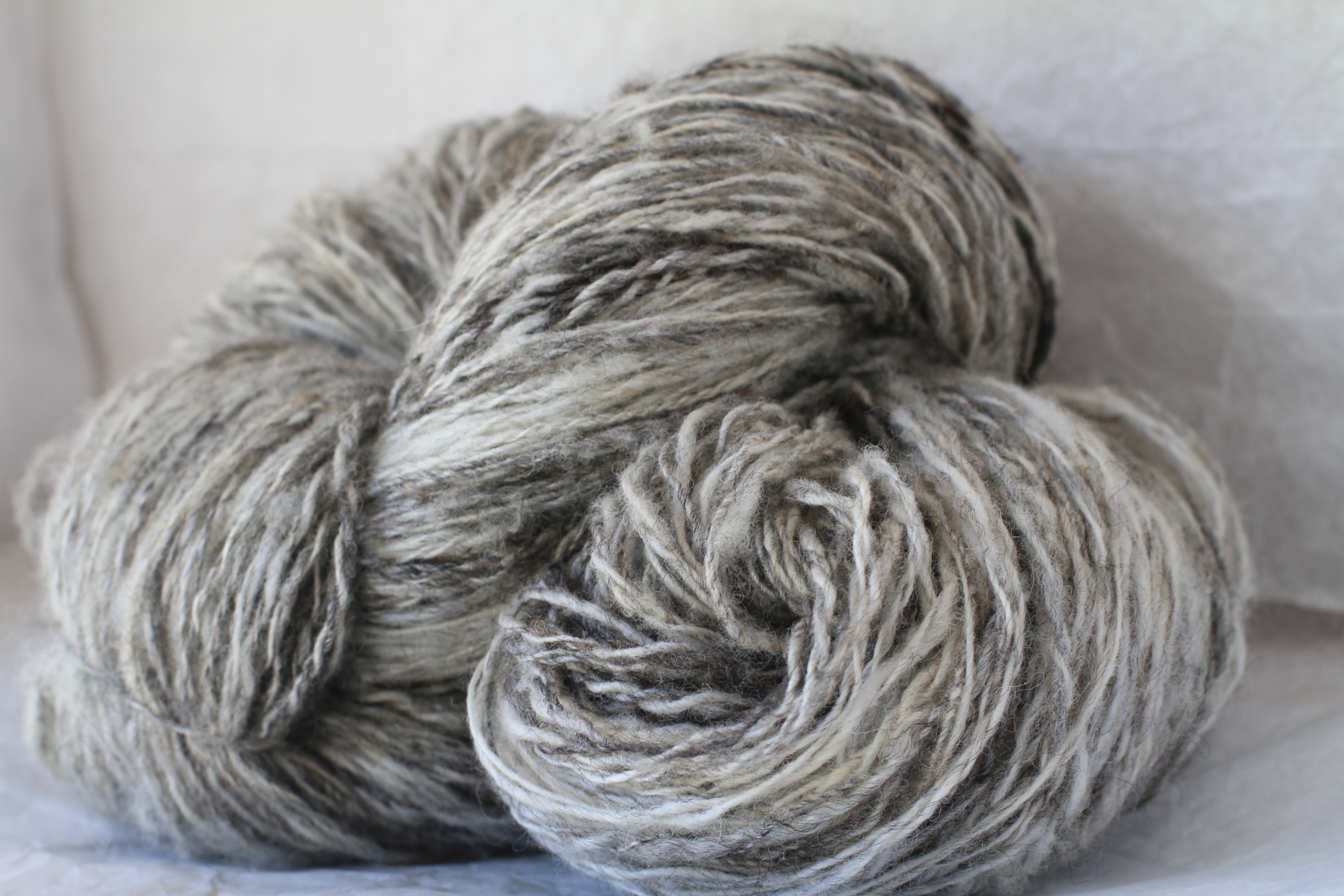 So…it did not turn out as I had imagined but it is still a pretty skein.  Most of the rest of the fleece is a gorgeous pale steel grey and I look forward to spinning the rest of it.  My plan is to use this skein in a tapestry rug, thinking it has perfect color variations for a cat outline but it would be good for a sheep too!

Another fun project was making coasters out of DWF roving.  I did a needle felted sheep coaster (70% mohair, 30% wool): 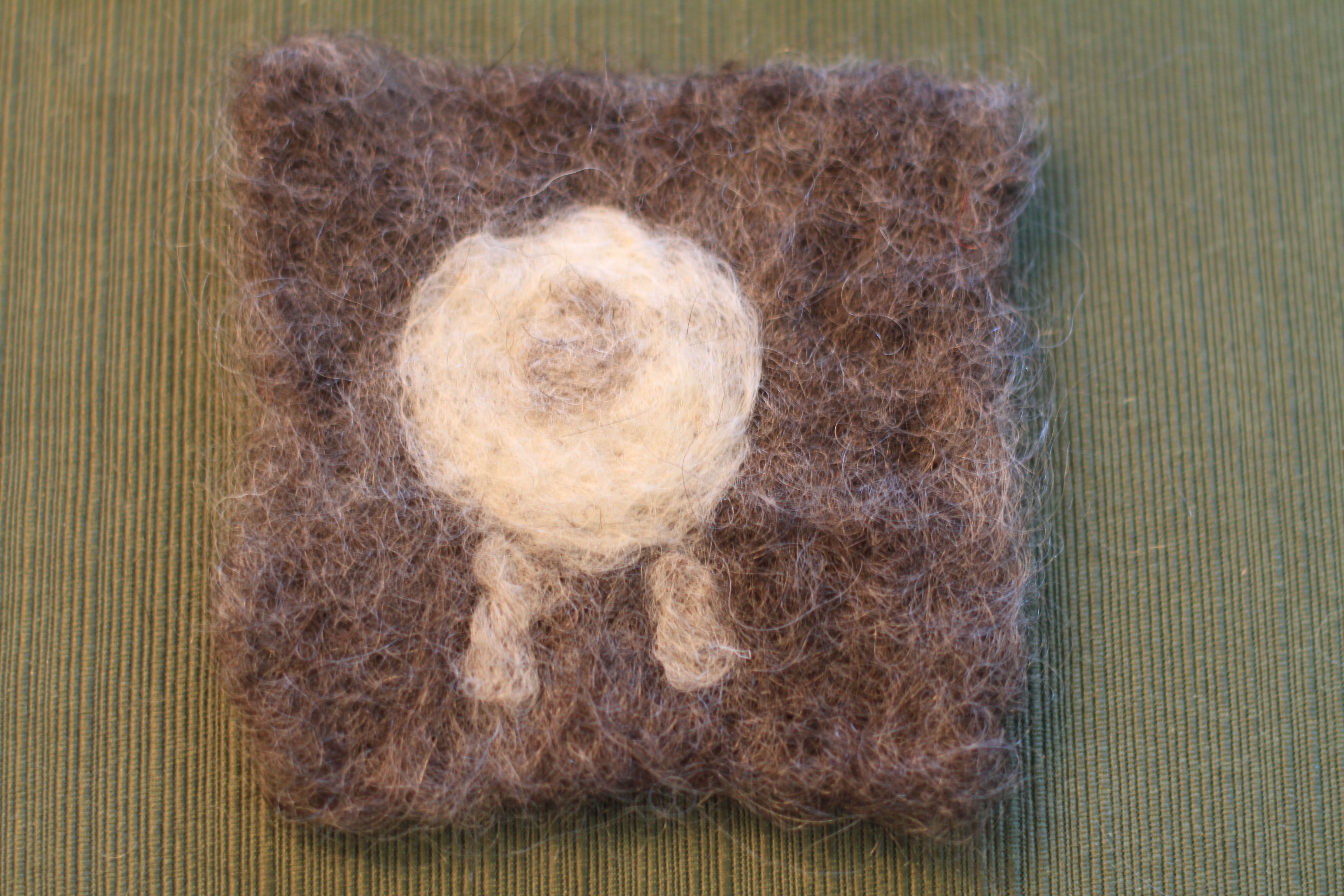 As well as hand braiding three colors of roving, then stitching them together.  Next I needle felted one, wet felted another for comparison.  I much preferred the needle felted version. 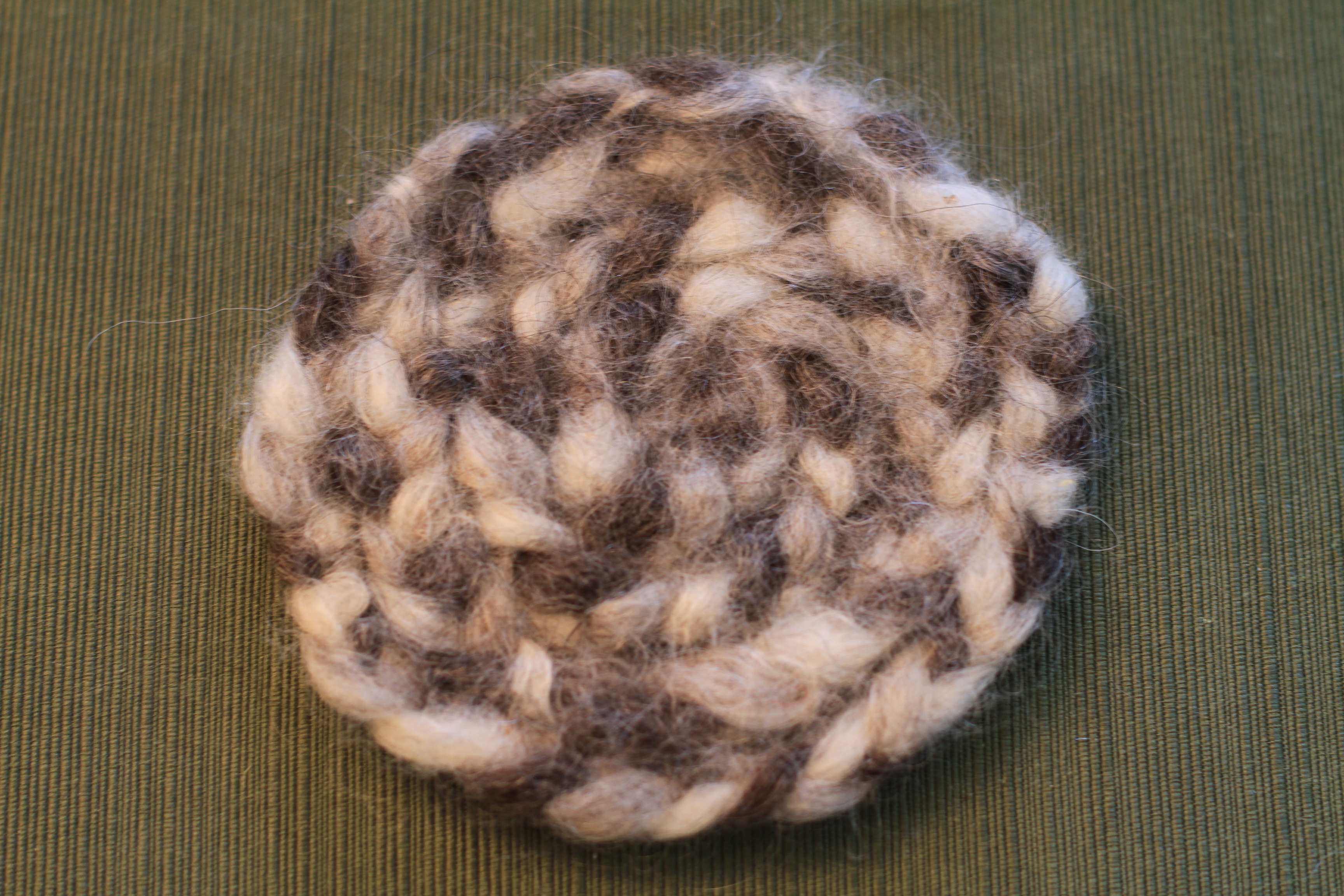 I’ve gotten my tapestry loom warped and my drawings taped up behind the warps, ready to go.  Now to select my background colors and get started! 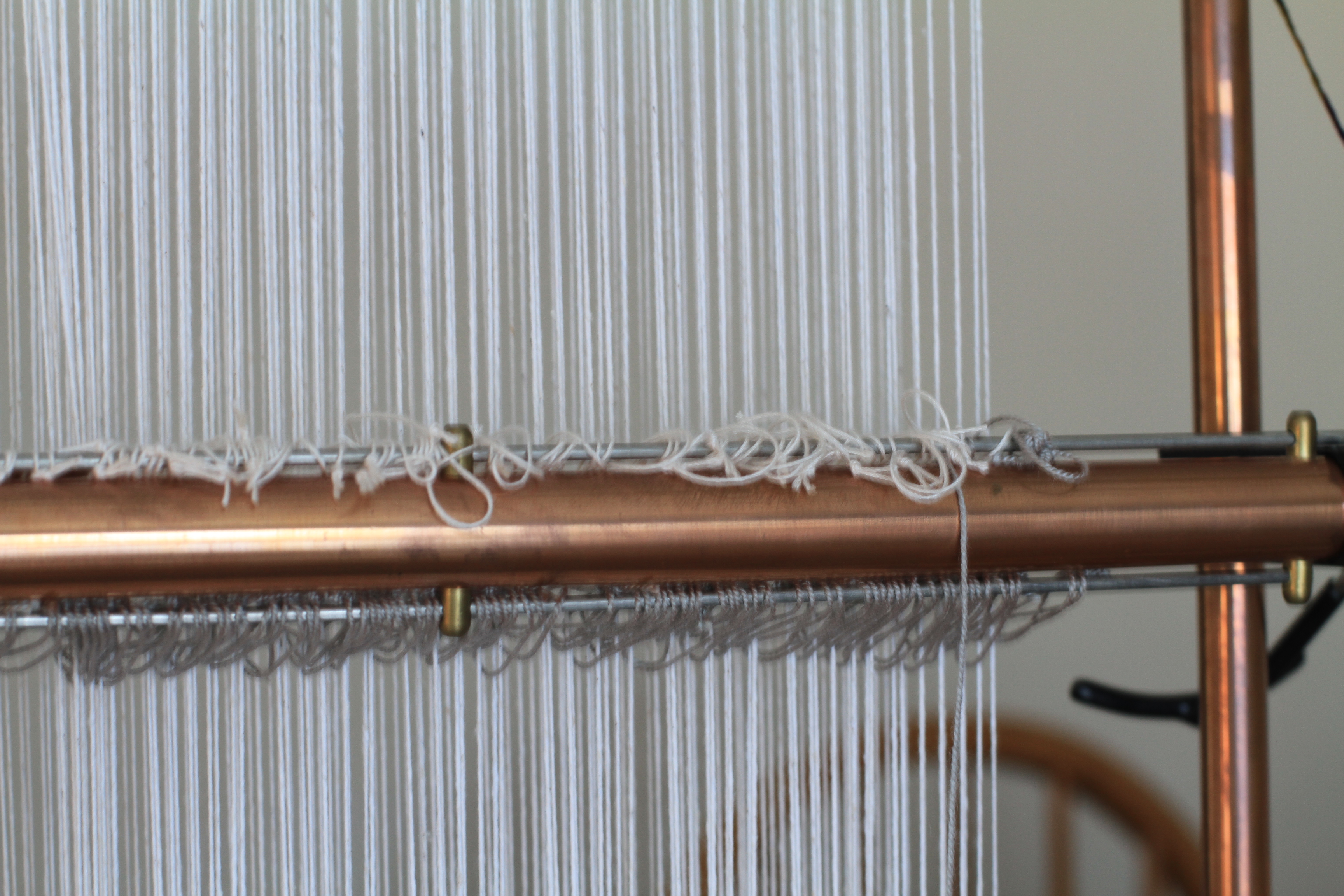